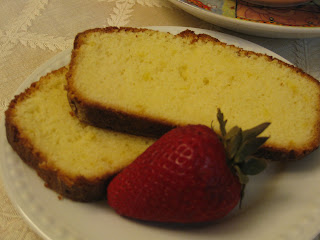 I should subtitle my entries for Baking with Julia "Baking with the Lazy and Ill-equipped".  The "lazy" part is self-explanatory; the "ill-equipped" is due to my zeal in culling out my possessions before I moved.

This week's recipe was for Lemon Loaf. A killer lemon bread is in my Twelve Things Diane Bakes(TM) arsenal already; this loaf is more like a pound cake than a quick bread in texture.

For future reference, as a substitute for cake flour, place two tablespoons cornstarch in the bottom of a one cup measure; fill the rest of the measure with flour. I remembered to buy the lemons, but forgot the cake flour and was too lazy to go back to the store.

A small, large holed cheese grater can be used as a zester in a pinch, if the correct size grater apparently was a casualty of the great purge.

What to do with three naked lemons? Make homemade lemonade, of course.

Close up of the crumb: 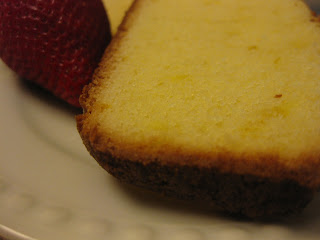 Taste test: The night it was baked, the lemon flavor was fairly subtle. The bread is dense, like a pound cake, though (mine at least) isn't quite that firm. The loaf is a bit dry, as many people have noted. Personally, I'd love to try it with a heap of macerated strawberries topping it.

The second day, the flavors were more pronounced, bringing the lemon to the front. Definitely better, but still needing the strawberries.

It's good, but I doubt I'd make it again (though I still want the strawberries).

For more tests and the recipes, hop over to Treats or The Place They Call Home.
Posted by Diane at 3:09 AM

Sweet and That's it said...

I didn't like it that much neither...well let's hope the next recipes will be as yummy as possible

Oh, you changed your comments thingy. Surprised me!

As to the cake, I'm always on the hunt for a pound cake that's not too eggy. I really hate an eggy pound cake, and too often they are. And love the way you tell the good/bad about the recipe. That helps. Just because it's a published recipe, and just because it's from a cool person, doesn't always make it a nifty recipe for everyone.

You definitely know what you're talking about. And those strawberries...yum...great idea. :)

Baking is my Zen...sweet nibbles for the soul said...

THANK YOU for sharing your cake recipe in your prior post. Will make it, for sure! :)

Melissa, you are so right about published recipes not always "fitting' the tastes of everyone. I can generally tell by reading the recipe if I will like something, but every so often, I'm wrong. I didnt' think I'd like the pizza rustica from a couple of weeks ago, but loved it (if I make the pastry a bit less sweet).

Yeah - Echo is folding at the end of August, so when I switched around the template, I changed back to blogger comments. I lost years and years worth of comments as a result. Boo.

This cake definitely benefited from some kind of addition (be it a glaze, berries, cream etc).
But on the plus side, it was so very simple.

Strawberries do make things better!
I don't think I will be baking it again either... may have to find another lemon cake recipe. :)

Nice crumb! I love your "about me". Made me smile.

Baking is my Zen...sweet nibbles for the soul said...

Diane, I made the Jameson’s Lemon Bread. Loved the texture and taste! Added pecans which were delish. Instead of combining 1/4 c sugar with lemon juice, I made a simple syrup with the sugar. I then added the lemon juice to the cooled simple syrup. Mixed it. Poured it over the hole laden bread. A definite keeper. THANK YOU for mentioning it! I’ve got to give you a hug for sharing this one!

BTW-How can I follow your blog via email? Can you put that feature on your blog?

...signifies "to be taking in knowledge, to come to know, recognize, understand", or "to understand completely". In the NT ginosko frequently indicates a realtion between the person "knowing" and the object known; in this respect, what is "known" is of value or importance to the one who knows, and hence the establishment of the relationship.